Tiwa Savage has joined Davido and WizKid to issue a disclaimer on endorsing COZA church program after videos including them in an advert has gone viral.

Tiwa Savage has taken to her social media page to state that she has nothing to do with COZA church and certainly doesn’t endorse their church program.

She said the video of her in an advert for the show was edited from an interview where she was asked to comment on how good God has been to her. She, however, expressed her disappointment on the fraudulent approach being used and warns that she would take legal actions if the video is not retracted immediately.

IT HAS BEEN BROUGHT TO MY ATTENTION THAT THERE IS A VIRAL VIDEO WHICH INCLUDES ME ADVERTISING AN UPCOMING COZA EVENT. I WANT TO STATE THAT I HAVE NOTHING TO DO WITH THE CHURCH AND CERTAINLY DO NOT ENDORSE THEIR EVENTS. I’M EXTREMELY DISAPPOINTED THAT I WAS FRAUDULENTLY APPROACHED TO SIMPLY COMMENT ON HOW GOOD GOD HAS BEEN TO ME AND IT HAS BE WRONGLY EDITED TO USE MY IMAGE TO CREATE AN ADVERT TO DECEIVE PEOPLE. COZA THIS IS WRONG!! I WILL BE TAKING ACTION IF THIS IS NOT IMMEDIATELY RETRACTED!! 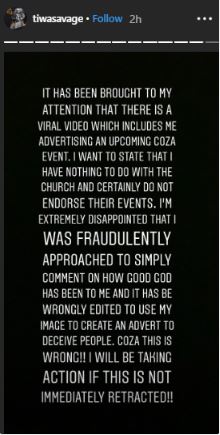