New York City might be seeing the relief in its battle against the Coronavirus pandemic as it recorded no deaths in a single day for the first time since March.

According to preliminary data from the New York City’s health department, zero deaths were confirmed within a 24-hour period between Tuesday and Wednesday.

The latest figures offer a welcome glimmer of hope following weeks and months that have seen thousands of deaths in America’s commercial capital. 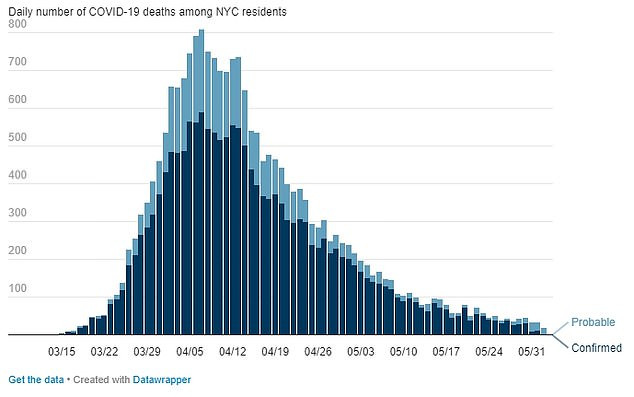 New York City’s death toll currently stands at 21,752 and even though the death toll did increase by 59 on Wednesday, those deaths had taken place on previous dates rather than in the 24-hour period from Tuesday to Wednesday.

The last time New York saw an increase of zero daily deaths was on March 12 – one day after the first death was confirmed in the city.

Health officials in New York cautioned that it’s still possible that the number could be upgraded due to lag times in reporting, because the three probable Coronavirus deaths during that period are still under investigation.

‘In the face of extraordinary challenges, New Yorkers have gone above and beyond to keep each other safe throughout the crisis,’ De Blasio’s spokeswoman Avery Cohen said.

‘With hope on the horizon, we will continue to do everything we can to reopen safely without losing sight of the progress we’ve made.’